The New Zealand Electronic Poetry Centre, co-directed by Poet Laureate Michele Leggott and Brian Flaherty, presents tributes to the late Ruth Dallas.
Go here to see tributes to the marvellous poet, Ruth Dallas who died about this time a year ago. (You will see my tribute if you click on number 6 at the top; although there does seem to be a problem with the buffering. Maybe our network provider's slow - but at least you can hear me even if I am freeze-framed.)
For another clip of me reading that some of you may be able to download - it's big - go here.
The tributes have been posted by the tireless, dynamo David Howard on Beattie's Book Blog (and a plug here for Graham Beattie's fantastic resource for writers with articles and reviews posted daily from magazines and newspapers from all over the planet ... I don't know how he does it so faithfully and reliably, but I am certainly glad he does.) 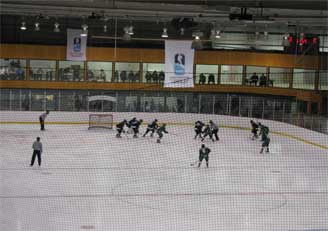 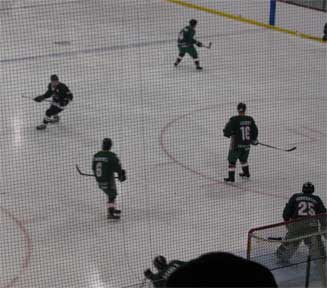 We went to an ice hockey game here in Dunedin on Thursday night. The game was the final of an international third grade competition, and it was between New Zealand and Ireland. We won! Robert and I were astounded that we couldn't find anywhere any announcement about the competition being on, or even about the fact that NZ made it to the final.
Anyway we enjoyed being part of a very large and enthusiastic crowd watching a swift game full of energy and skill - even if our bottoms got verrrry cold sitting on the concrete seats.
Another sporty piece of news - my niece made it into the NZ women's softball team. Congratulations Nicole!
***
Hearing one of my brothers on the phone last night helps me (as it always does) to remember my father's voice. When you lose your father at a young age, it's things like forgetting his voice, his face, that hurt the most. But as long as my brothers are around, my memory is jogged as to what Dad looked and sounded like.
cold, clear air
At the end of the day
in socks, the cold, clear smell
of fresh air still on him, Dad
had his way of arriving back;
the glass of water he'd gulp,
the hanky tugged out from his pocket,
the way he'd lean back
against the nearest doorpost
to rub and scratch the itch,
or ache, between his shoulders.
Once after seeing me on the floor
poring over the world map
I bought with my own money,
trying to find Luxemburg,
he laughed and teased
saying, "Can't wait to leave?"
How could he know then
that he would be the one,
dying long before
I could ever leave him?
Kay McKenzie Cooke
*** 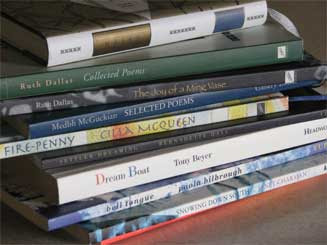 I have my next pile of books sorted and ready for reading. Not having the spare cash right now to buy books - much as I'd like to as there are so many people recommending some great books (stop doing that people!) - I am instead going through my bookshelves to find books to read again.
I have already spent an enjoyable few hours reading Jenny Bornholdt's 'Summer' and Rachel Bush's 'Hungry Woman'.

The poem about your Dad is very moving. I liked the way you started by describing him coming home and ended with him leaving. It must be some comfort that one of your brothers sounds like him.

I see Medbh McGuckian's Selected in that pile, love to see what you think of her. I had that out of the library about two weeks ago.

NZ beating Ireland at Ice hockey - I am not one bit surprised!!!

What a powerful poem about your father! Oh, it really left me sad. I got such a strong sense of him.

Hockey is not my favorite sport. I maintain that you can't see the puck, at least not on TV.

Kay,
I'm fond of libraries and they do keep my expenditures for reading material reduced.
We are never ready to lose a parent, certainly not when we are children.
rel

Lovely to "see" you again, reading your tribute. Ruth is a fine poet.
Libraries fill my reading needs when I can't but books (though I always want to buy poetry books at launches).

I also wanted to say thanks for reading and commenting on all my NaPoWriMo efforts, it's been a bit of a struggle this time.

that's a very moving poem, thanks for sharing.

watermaid - Thank you. One of these days I will be able to stop writing about my dad - maybe!

Barbara - Medbh is a difficult poet - I guess I don't try to make sense of her writing so much as enjoy her work with language.

Becky - Thank you so much - I'm touched that you were so moved.
The puck is a hard thing to see.

Catherine - You have done so well.

CGP - Thanks so much.