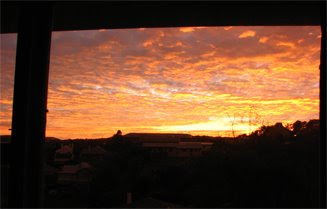 This was the view that greeted me when I swooped back the curtains one morning through the week. Taken from my new office. Winter is a bit of a drudge. I like the word drudge - it conjures 'trudging through darkness' which is exactly the feeling of mid-winter for me. Think: George Herbert's quote - 'A mile in summer is two in winter.' Although I have to say that the winter darknesses are interrupted by welcome, sunny 'middle of the days' - not unlike a stripe of lemon icing in the middle of a chocolate cake.

***
Matariki - the Maori New Year - is with us again. The link takes you to a description of this event from the excellent 'Te Aro Encyclopaedia of New Zealand'.

The Pleiades is the European name for the set of stars Matariki refers to. When these appear in the Southern Hemisphere sky, the Maori new year of planting crops etc. begins.
It appeals to me to begin the year in the winter - after all, that is when the rest of the world begins the year.
So in keeping with this sentiment, I have decided that could well be the cycle my writing follows - in winter, fallow; all ideas and imaginings restoring in a muddy, murky darkness; until emergence in spring. It is good to view winter as the beginning; the idea that it is in the middle of the cycle is a transplanted European idea. My sister and her partner have the right idea with their winter project of an establishment of a vegetable garden. (I wonder if they are aware that they are following the Maori planting cycle?)

***
Yesterday we travelled on a journey into the interior - to a place called Roxburgh - and back, and so didn't have time to attend the mid-winter festivities (Festival of Light) in Dunedin's Octagon.
Instead, as the longest night of the year seeped into the shortest day, we travelled through bare, rocky ground, the light strange and mellow, with a full moon and the weirdly warm energy given off when water vapour condenses and crystallizes into snow.
The reason we were in Roxburgh was for a great nephew's 1st birthday. He was the cute, blue-eyed, blond-headed star of the show and in true one-year-old fashion, totally unaware of this fact.
I was intrigued by the setting up that a one-year old can be given. Is this only In New Zealand? He was given a huge toy transporter with bulldozer on board (the grandfather that's not my brother, happens to be a truck driver) ... although the uncle that was responsible for the present, still didn't get Dad's approval ... which he's probably been trying to attain all his life ... because it was a Mercedes and not a ... Bedford? (whatever the make that Dad/ Grandad drives anyway.)
And when great-nephew dipped his hands into a carton of Speights beer bottles, there was much gusty laughter of approval going on. Even if on great-nephew's part, it was purely because the clink the glass bottles made was an interesting sound. Families will be families. And all the more interesting when in-laws and outlaws are merrily mixed together in a combined gathering.
The party was held in a house that looks across the busy main street of Roxburgh to the golf course's rocky 'moonscape'. 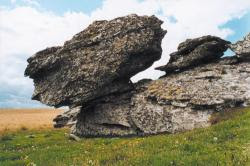 (This photo is from my previous link to Roxburgh.)
When I asked the owner of the house if he enjoyed the view, he scoffed at such a prospect. What a waste of good rocks! I couldn't help thinking.
It was a home where they freely confessed they never sing. So the usual 'Happy Birthday' after the cake was cut (an impressive Thomas the Tank Engine made by Granny and Aunty T) was missing. I felt a a little forlorn about this. But 'Great Aunty' is way down the list from those-with-prior-rights to instigate proceedings, so my hands were tied. Maybe one-year-old great nephew was happier not to hear what would doubtless to him be just a sudden burst of off-key yelling. Already he had been thoroughly traumatised by the appearance of a scary, six-foot clown!

***
Listening: Harry Nilsson
Eating: Shortly - something that Robert is cooking - something with mushrooms and garlic ...
Drinking: G&T
Reading: A couple of NZ short story collections - Dan Davin's 'The Gorse Blooms Pale' and Laura Solomon's 'Alternative Medicine'.
Watching: Nothing - there's nothing worth watching - I think we'll have to get Sky.

Hi - But of course - link away :O) ..Following the maori way of planting... Yes I did realise even if only followed partially ..But many similarities to rural northern hemisphere ...

Sky - Worth it but really some nights are a viewing desert on that too ..... Rialto films are good at times :O)

I love those rocks! They look Welsh.

Also, I agree with your sentiments. Spring seems to be the right time to start afresh. I think we all come alive with the buds.

"A mile in summer is two in winter."

I've never heard that quote, but it's a good one.

I like "drudge" too, as well as your use of "seep" farther down in the entry. I think I will add "seep" to my list of favorite words, because it implies a kind of pain but also a holding back from the full experience of pain. I don't know ~ maybe I am the only one who thinks that what "seep" implies.

I didnt have a clue it was following anything but the lunacy of a pom!!!!! and I'm the one with maori blood!!!!!

Should I mention its your birthday on Wednesday??? I have something to send to you....will have to get it couriered now....and I've had it for weeks as well!!!!

Kay, we had Sky in a motel for a week or so, and I wasn't impressed enough to want to spend money on it.
There's always DVDs, or books :)

dinzie - will link then so others can admire your fantastic efforts.

clare - They look ancient enough to be that is for sure.

dana - You are a treasure - I love the way you love words - and so happy you noticed! ;)

mcd - Ha ha - you make me laugh lil sis.
Ooooh goody! Looking forward to the pressie !!! Yes Wednesday is the Big Day - no matter how much I try to ignore the fact these years ... creak, creak ....

Did enjoy ALL your piccies (aren't we getting fancy!). The new baby is so beautiful. I know you can hardly wait to hold her and kiss her hair and smell her neck.... Enjoyed seeing your family--such TALL sons you have! And a beautiful daughter and g-daughter, too!

I, too, find that Winter brings on longings for "lemon icing in chocolate cake"

Joyce - Thanks for taking the time to gaze! Only one son is tall .. the other two bemoan the fact that they got the short gene - esp the one who plays basketball. (But they are certainly all taller than me!)
Thanks for the Happy Birthday greeeting which I read first thing on my birthday morning! :)

Avus - O yes that lemon icing is a saviour!