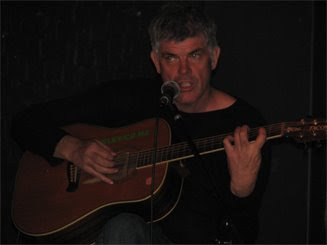 Went to see Luke Hurley at Backstage last night. Unfortunately we didn't stay until the end as I had an early start for work the next morning. He threatened to keep singing until 1.00 a.m. ... I wonder if he did. He seems to have boundless energy and an amusing unpretentiousness ("This is a song I wrote outside Arthur Barnett's") which is reflected in his music. I guess his music fits into the folk-rock bracket - however, it is also a fairly organic style, so has the potential to bound away from any attempt to label.
I liked the way he'd sing a bracket of songs and then have a break. He writes all his own material and has been troubadour-ing in NZ for decades. It was actually our son M who first introduced us to him; even though Luke is more our generation ... He deserves more acknowledgment than he gets from the mainstream - but something tells me he'd hate that, so maybe it's best he stays where he's happiest - performing gigs, busking on street corners and staying largely under the radar.

We are away for the long weekend - to South Westland to see our son C. It's ANZAC (Australia and New Zealand Army Corp.) weekend in New Zealand. ANZAC Day tomorrow - Friday; Red Poppy Day; when we remember the New Zealand and Australian soldiers who have fought and died. 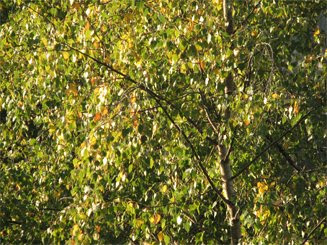 hope you have a great weekend! And good to know about Luke Hurley and NZ's troubadour scene!

I shall think of red poppies then... and those souls who passed.

The troubadour looks like he made it a lot of fun. Glad you went, glad you didn't stay all night, sleep is important.

Enjoy your visit and be safe!

I love a purist troubadour. ;)

I'll have to google him! Have a great weekend.

We here have much to be thankful for in the ANZAC sacrifice.

CB,
Live concerts are the best! Living in the boondocks we have to travel an hour or so to take them in but it's always worth it. Thanks for the introduction to Luke, I'll check him out after D. gets up. ;)

Have a great weekend with your son!
rel

Luke looks like a devilish sort and lots of fun. Bet he absolutely went until 1am. Hope you have a grand time this weekend. What stunning beauty you live in. I think that every time I see your pix.

have a great weekend!

My son, Gavin, has an incredible nose for non-mainstream talent. He goes off any of them, if or when they make it into the mainstream.

Hope you are having great fun, even as I speak!

scarlett - Thank you. Glad to see you back visiting again :)

tammy - Yes i think the troubadors are worthy of more attention - but then, it would defeat the purpose somewhat i believe.

apprentice - it's worth thinking about every year ... lest we forget and all that.

rel - Hope you enjoyed your sample of a kiwi troubadour.

becky - NZ is a beautiful country - hope you pay us a visit one day. :)

watermid - I can appreciate Gavin's
attitude.

Hens! WHo would've thought it??? Hens. And here I was thinking it was some sort of exotic vegetable. I am getting quite an education!

A belated comment, this: I was at Gore High School with Luke Hurley - I remember one assembly at which he got up and played the guitar, accompanied (if I recall correctly) by himself on tape. This was radical stuff for Gore High School in the mid-1970s - I was deeply impressed, and felt a new era was dawning! Even at that stage, Luke had a lot of commitment to and confidence in his work.