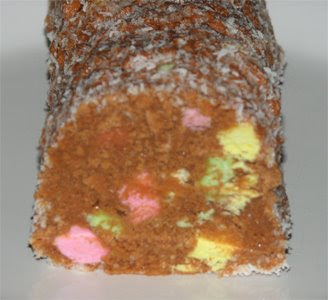 I made two lots of Lolly Cake tonight. One lot is stickier than the other. This is because one recipe (which I've since discarded) said to heat the condensed milk. However, this only made it goopy. (Still tastes yummy though.) The second recipe didn't mention heating the condensed milk. This one turned out better.
The only recipes I have for Lolly Cake come from books that date back to the seventies. I had to use Eskimo lollies because hard marshmellow lollies are no longer available. I wonder why? While on the subject - does anyone know if they make the lollies known as Smokers anymore? I guess the name Smokers isn't allowed now. Not P.C. (Which makes me wonder why Eskimo lollies are still allowed.)
As a child, I never associated Smokers lollies with the act of smoking. They owned their very own connotation - that of very small, very pink lollies in tiny cellophane packets. I associated them with the pictures' (films / movies/ flicks) and the threepenny tray.
The Lolly Cake I made is for sending over to S and E in Japan. Lolly Cake is an iconic NZ treat (found in any good cake shop / cafe) but not obtainable in Japan.

Addendum: Due to the interest from readers unused to the culture of New Zealand, I have decided to elaborate a little on the ingredients needed to make the cake.
Lolly = candy.

Eskimo lollies - best described as a hard marshmallow formed into the shape of Eskimos. They come in the colours pink, yellow and green and form the typical stained-glass colours found in lolly cake.

Malt biscuits = 'cookies' with a malt flavour. One of many kiwi standbys in the realm of biscuits (a.k.a. Iconic Cookie.)

Highland Condensed Milk - A creamy, sticky substance that forms the 'glue' holding the malt biscuits and marshmallows together. 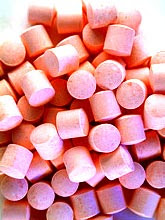 And Smokers lollies - candy with an aniseed and clove flavour (other NZers may have their own descriptions) that for some unknown reason, went by the name of Smokers.

***
None of my poems were chosen as one of the Best New Zealand poems; however, one of them, 'no new broom' was mentioned in the Introduction by this year's judge, Paula Green. Congratulations to all the poets whose poems were selected and/or mentioned.

In 1957 she didn’t trust
‘new-fangleds’. The brand-new electrolux
with its attachments lay still
in its box, its flexi-hose the neck
of a dead goose.

She far preferred
old brooms to any new
ones. Especially her favourite
with its bristles all leaning to the left
towards the ocean worn down from years
of sweeping.

congratulations to you! I remember this poem now -- it's quite beautiful, that 'neck of a goose' and the broom bristles all going one way -- exactly describes the vaccuum cleaner and broom in mum's broom cupboard.

Nice poem. Universal thoughts. But only you thought to put it into words.

Being the American I am, I don't know what a lolly is. Maybe a marshmallow? And I know less what a Smoker lolly would be. Great looking cake.

I appreciate the NZ flavor.

Congratulations on the honourable mention. I've been browsing the poems but hadn't read the introduction yet.
I think you can still get Smoker lollies, though they have another name - I can't remember what. You can still get what we used to call sweet cigarettes, in a box,but now they are called "candy sticks". White with pink tips.

Lolly cakes? Eskimo lollies? Smokers lollies? These all sound very foreign and exotic to me.

I'll bet your poem was as good (better, even) than the others! MY broom looks like your mom's.

CB,
I'm with Pepek, I haven't a clue to what lollies are of any sort; smokers or not. ;)
Your poem reminds me of Ted Kooser's style:
down to earth, everyday common observances made more powerful through the poet's eye.
rel

kd - And congratulations to you!!!

belle - I have added a bit to the post in order to enlighten the non-kiwis among us! :) Thanks for your question.

catherine - Thanks Catherine. BTW great to hear from you - are you blogging again? Must go see.


pepek - You are too kind. (It'll get you into trouble!) I have added a bit of elucidation.

rel - Ted Kooser! I wish!
Have added to the post so that you, and others like you, will have a clearer idea - hopefully.

CB,
Thanks for clarifying lollies for us.;)
rel

I betcha with the aniseed and cloves they were called 'smokers' because smokers used them as breath savers...what d'you think?

I betcha with the aniseed and cloves they were called 'smokers' because smokers used them as breath savers...what d'you think?

As one of the non-natives, thanks for enlightening me on NZ culture. The lollies look scrummy. I'm sure your son in Japan will be appreciative. I remember spooning condensed milk from the tin as a child. I also loved aniseed balls and sherbet dabs with liquorice straws.

Felt I had to post again as I forgot to say how much I liked the poem - your poet's eye at work again.

From the politically incorrect confectionary I remember from my childhood, there was a cigarette based lolly called "Fags" which was a white mint flavoured stick with a red tip. You bought them in a mock cigarette pack.

We also had Nigger Boy liquorice.

rel - My pleasure - sweets is the British term for lollies. I probably should've mentioned that for those on the other side of the Atlantic.

pepek - I betcha you're right!

watermaid - Thank you. Yes, remembering our fav. lollies from childhood is an enjoyable experience.

anne s - Those cigarette-style lollies would be what Catherine described ... we just called them Cigarette Lollies I think.

Thank you for explaing what a lolly is. I had no idea.

And congratulations on the honorable mention. It's a really solid, tight poem.

I love you broom poem! Congrats. on the honourable mention. I've never heard of Lolly Cake. I'm not much into sweets, but it certainly sounds intriguing.

Beautiful capture ... something I usually write about photographs but the poem acts as a powerful snapshot and more.

Congrats. I don't remember this poem (I know there's a lot I still have to discover), but it's brilliant in the way it says "it" in so few words. Quality.