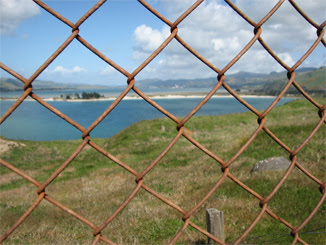 There is a certain irony about having an albatross colony smack bang in the middle of an old defence outpost. In 1870 something (I have still to learn my dates) there was a perceived threat to New Zealand's coastline from Russian warships ... 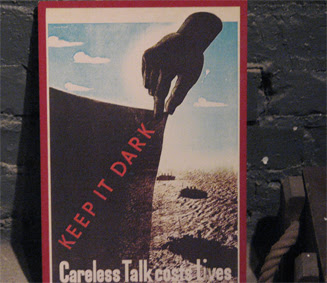 As part of the defence effort, a gun (canon) with the ability to pop up, fire and then disappear back down into its hidden burrow, thus (in theory anyway) completely foxing enemy ships, was shipped over from England. 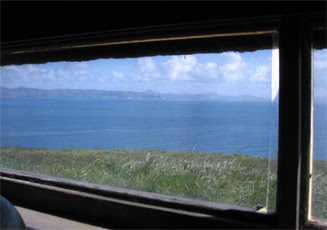 View through the Observation Post where the soldiers looked out for enemy ships. None arrived.
Today all we saw was an Australian naval ship on its way out of port after a visit. The obvious jokes were made! (Kiwis and Aussies enjoy having each other on ..)
We did see albatross soaring, and a few little swallows dipping and flying above the grass.
Peace reigns!

The gun was then duly ensconced into a custom-made basalt-lined pit in the dunes. 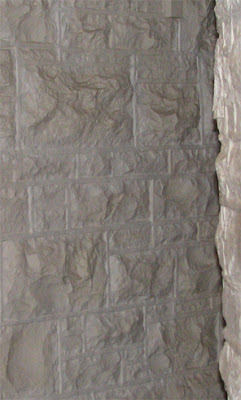 Secret tunnels were dug in order for the army soldiers to get to and from. 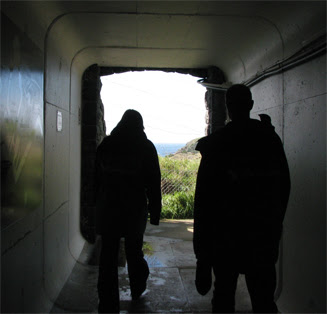 The gun (known as the Armstrong Disappearing Gun) is still there today, resplendent in Army Green. It still works too, although it has been a long time since it was tested. And as events and history unfolded, it was never needed, and so has never been fired in anger. 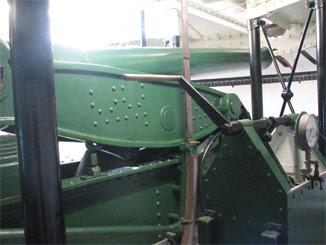 I cannot help but smile at the dear old albatross deciding to plonk itself on the headland among the fort and barracks. The albatross first chose Taiaroa Head as a breeding site in 1920, so was still breeding there during the Second World War and the Home Guard's training camps. 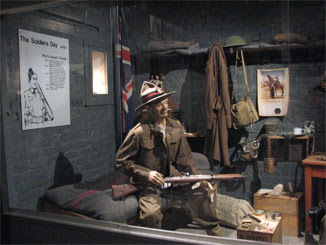 Part of the Museum display at the Fort.

Learning these and other fascinating facts is part of my homework tonight. 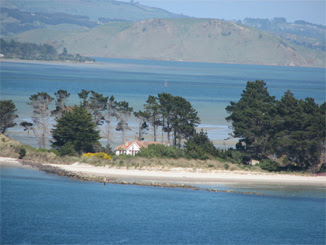 Right now at the colony, the albatross are arriving and establishing pair bonds and re-establishing breeding pairs (getting married again, so to speak.) For the next fortnight or so, they cannot be disturbed as they choose nesting sites and generally settle down for the long 13-month breeding cycle. At present until we are trained and can accompany the tourists and visitors, we have to be content with spotting them whenever they leave the headland to soar overhead towards the Albatross Centre. I haven't been able to get a photo as yet. But it is a goal. 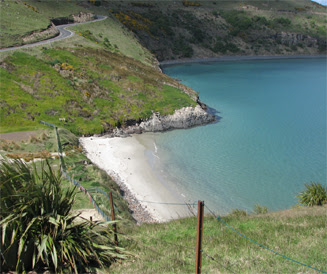 Pilots Beach, where there are fur seals to be seen.

What a sight it is to see the albatross soaring. 'In all of nature there is hardly a more inspiring image than that of an albatross in flight. Its seemingly effortless sweep over rimless, often storm-tossed ocean speaks of a graceful endurance and a thorough command of its realm.'
* A quote from the writer Neville Peat from the book, 'The World of the Albatrosses' written by him and illustrated by Chris Gaskin. 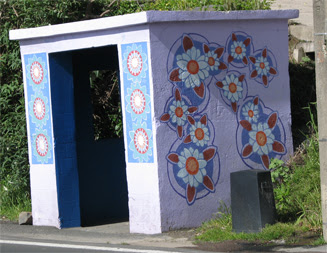 Two painted bus shelters I go past on my walk to the car-pool pick-up point. 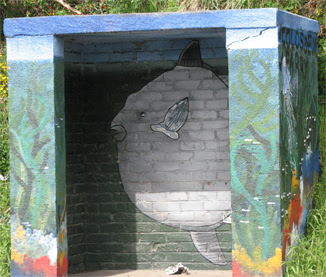 I'm so glad that there's a gun that has never been fired in anger; used for it's intended purpose.
GOOD.

Don't know if you missed it, but I gave you an award over at my page... because you make me smile every time I come here!

Just realised that blooging is like a world tour every night! Thanks.

scarlett - Thanks. I went over to your site when you first alerted me, but missed it - must go back and take a closer look! Thanks so much - you are very generous.

The bus shelters are great! There are similar gun placements in Auckland that I used to scramble over as a child ... I always found it difficult to believe that we once faced this kind of threat! :-)

I think a few places over here would be well cheered up with the odd painted bus stop!
Great idea!
I think Im going to hunt out a paint brush and tiptoe out in the moonlight...

What a cool job! except for the guns....But isn't it odd now..how guns seem almost old fashioned...as tools of destruction..as terror is more globally focused.

Then to oppose this with an effortless flight of a poetic bird..

You'll have many a discussion with your muse, I think??

shameless - Yes NZ had to establish these gun placements up and down the coast. This fort at Taiaroa has the only working disappearing gun in the world - all to no avail. thankfully. But it does work !

jan - Do post the results of your nightly efforts1 ;)

wendy - You're right ... I can't wait to get some of those thoughts, impressions etc into a poem.

Thankyou for the tour cb.