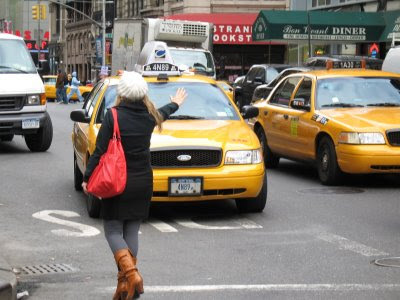 The piece below, along with the picture above, is the first instalment - written by Seamus Kearney for the Shameless Lions Writing Circle collaborative Short Story.

The new watch that Grace's husband had given her the week before slipped inside the sleeve of her coat as her arm went up in the air. She felt she had no control over the movement, as though it were completely natural for her to be hailing a cab in the middle of New York. She felt as if she were being directed by remote control. 4:42pm, October 7. She made a mental note of the time, thinking it might be something she'd always want to remember.

"I just want you to drive," she said as she got in, avoiding the driver's eyes.

He sounded like he might be Middle Eastern, although the writing on photos and cards above his head looked like it could be Greek. She also noticed African music coming from the radio.

"I'll let you know. For now just drive anywhere. Wherever your instinct takes you."

"Whatever you say, sweetheart."

During the few minutes it took for the cab to rejoin the flow of angry traffic, she stared at the entrance to the subway that she'd been using to get home every night for the past 12 years. Ample time to change her mind. She turned off her mobile as the cab swung into Third Avenue. Happy trumpets played as a grainy picture of Sebastian and the two little ones faded into black. (1)

Seamus nominated me to continue the next piece ... which is what follows.

Grace sat back and tried to relax. All her muscles were tense. She moved her head a little from side to side to try and release some of the tension in her neck. She made an effort to relax her face muscles that she was sure were drawn up into a tight mask.
As the cab swooped along with the stream of homeward-bound traffic, a sudden gust of wind swirled fallen orange and red leaves into a mad dance. She found their dance mesmerising. It reflected her mood of being drawn into a wild dance, almost out of control. Where the dance would lead, she had no idea.

She nodded, still not meeting his eyes. She wished he would stop calling her sweetheart. She didn’t feel like anybody’s sweetheart.
She looked down at her tan boots and noticed one of the toes was scuffed. She fingered the money purse inside the large red shoulder-bag sitting beside her like an obedient pet. She would have to watch the fare. After all, she only had so much money to go on. She made herself stop biting her fingernails as she tried to figure out just where she wanted the taxi cab to drop her. (2)

For the next section I nominate Wanderlust Scarlett

OOhhhhhhhh. Brilliant .... Grace takes shape. Lovely. I can't wait to see what Wanderlust comes up with.

I am a little sick to my stomach with anxiety though... following you and Shameless right away? You two are some of the best writers in the group!

I thank you humbly for the nomination, just hope I can offer something quality to the group. I will endeavor to do my utmost best.

I have to tell you, I LOVE the red shoulder bag and the 'obedient pet'... that was genius.

Well. I'll have to do it this weekend; school you know. It'll be up on the blog Sunday night.

Scarlett & Viaggiatore (who will help, thank the guardians!)

shameless - Thanks - it was fun.

scarlett - You will do a brilliant job, I have complete faith in you.

cs - Looking forward to reading your part too.

This is so much fun! My writing group awhile back wrote a whole novel this way-- each of us was one of the characters, and each would write a chapter from that point of view. (I still have a copy of it under my bed!) It was really good, too. We should have sent it out....a murder mystery.

PS We called it "The Push."

PPS As in, what it takes to send you over the edge....

pepek - Wow a whole novel - it took so much brain power to do those few lines ... I can't imagine what a novel would do - burn-out!