Frost is what keeps us from being invaded by locusts and ants. Besides, I have always appreciated its clarity. The clean canvas. Shards of air snap frozen. 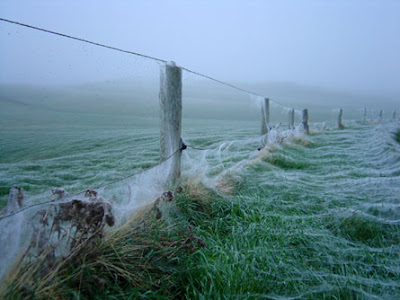 This photo taken of frost on a fence near Orepuki, is not my own. I picked it up from the internet about year ago and now cannot locate the source. If it is yours, or you recognise it as someone's you know, please let me know so I can properly acknowledge ...

Later: After hours of searching I did manage to find the photo ... here is the site where I got it from. The photograph turns out NOT to be of frost, but of spider webs in fog! And it was taken by Nanette Sinclair. 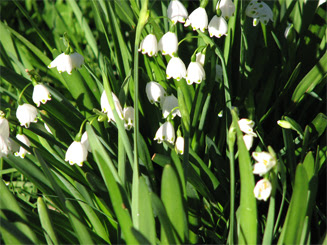 Of course now with spring’s arrival and plum blossom scenting the air with a thick, dusty sweetness, the frosts are fewer. Blossom on a large plum tree below our house, catches my eye with its whiteness - like a descended cloud. Or a patch of un-melted snow. Every morning as I pull back the concertina-ed, wooden garage doors, the sound of the bolt I can never be bothered to raise, scrapes over the concrete and is always followed by the tootle of our local bellbird. As if saying that it'll look after things while we are out. One of our cats grizzles at our departure and heads up the driveway towards the neighbours. The nose of the car swings by trees silently growing back their leaves.

At the Poetry Readings on Wednesday night, Richard Reeve was the featured poet. M.C. Sue Wootton introduced him with some robust quotes from past reviews of his poetry.
He read a long poem from his soon-to-be-published book, ‘In Continents’. (As far as I can tell, any ambiguity in that title is intentional.) He also read seven rhymed lyrics about outlying islands in the southern ocean. He had my full attention just at the very idea of poetry being written about the outlying islands of the southern ocean. Solander Island in particular, it being almost a mythical part of my childhood landscape. As always with Richard’s poetry - it blew me away. ‘cloud orchards’ and ‘rashers of kelp’, just two of the striking images typical of what Richard's packed poetry offers.
Richard’s subject matter is always from the ground up. If he ever strays to include the sky, one can guarantee a return earthward again to plumb the depths of the soil. Or to listen to shellfish in the mud giving off blind signals as to where it all began. There is not another landscape poet like him.

Among the other readers on Wednesday night, there was the beautiful Tahlia Matthews who read a priceless poem about a friend’s experiences with some pet ducks. Funny, tender, sad, realistic, conversational and dramatic - it was pathos at its finest and perfectly delivered in Tahlia’s customary dead-pan style. It is a poem that deserves a good agent and a wider audience. Given the exposure and the chance to travel, I believe that poem has the makings of a kiwi classic

Peter Olds delivers astute, honest poems with a street-wise reality - salty poems that come to the reader from dog-eared places where despair or fear threaten to haul away any hope. On Wednesday night, Peter read out a very funny poem about flying and what the fear of flying does to one’s sense of composure. His descriptions of his fellow passengers on the plane were cutting and somehow very familiar.

Another treat was hearing a young man quote a poem he has memorised from his childhood - a Tolkien poem called ‘The Mewlips’. Fantastic. Kudos to this lad’s mother who read poetry to him when he was a kid.

As Sue put it at the end of the readings, Wednesday night at the 'Circadian Rhythm' was a night that John Dolan would’ve enjoyed immensely, because it had ‘range’; something that Sue remembers as being important to John.
(It was good to hear John’s name mentioned. We miss him and his wife Katherine. Afterwards, among a few of us, desultory comments were made to that effect. Dunedin, post-Dolan, somehow still has a hollow ring to it.)

***
I like this ABM quote (he can come up with some good’uns - not always for public consumption however!) While trying to describe someone who's a 'waste of space', he came up with this definition: “Their bodies are only useful for carrying around their heads.” 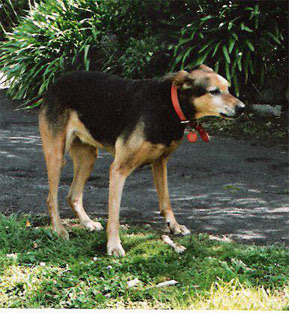 K took Jedi for a walk the other day and ended up carrying her after she got stuck on some rocks. Jedi is now in her 80s in dog-years. We wonder if she’s suffering some sort of dog- Alzheimers, as during a 4.00 a.m pee in the backyard, she took off and had K (still in her pjs) running off down the street after her, desperately trying to call out quietly so as not to disturb the sleeping neighbours.
Jedi has a really bad, arthritic leg which she can’t usually put any weight on, so keeps hoisted up. K gets sick of people asking, “What’s wrong with your dog?” She says she wants to hang a sign around Jedi’s neck that says. ‘I suffer from arthritis. I am old.” K says it’s like an old person with a walking frame continually being asked, ‘What’s wrong with you?”

***
My daughter has the wickedest sense of humour. Working longer hours has meant I haven’t been able to spend the time I used to with her and my granddaughter.
One time we were talking fanciful nonsense - something we like to do - and imagined post-nuclear children. (Let’s just say it’s a sci-fi thing.) R made up this scenario of a mother explaining about her child to another.
“He’s got no toes, but at least he’s got all his fingers - which is a bonus. He’s only got half his hair - but then you can’t have everything. And he’s got clear skin ... Well ... it does glow at night, but then, doesn’t everyone’s?”
She kills me.
The other day she was taking their dog Ace for a walk and as she went past some road-workers they called out,
“Does he bite?”
R’s riposte?
“No. He’s pretty fussy.”
She said it wasn’t until she was just about out of earshot that she heard one of them say,
“What did she say?’
And then they burst out laughing.

I'm still having to resort to using photos from my library, however, K. my d-i-l, is dong some great work with the camera and it's great to see her so inspired. She has a Fine Arts Degree, so the Canon is in good hands.

Meanwhile ... I am continuing to use my eyes alone.

And now for the biggest news of the week:

I am very excited to say the least. I can't wait to swap small children for large seabirds!

If you do find the source for that frost photo, I'd be very grateful if you'd send it to me.

The frost picture is great.

It sounds a lovely night, and good for the soul.

Congrats on the job, I can't wait for your reports on it. I watched a programme from the S Atlantic on the albatross and it was brilliant and heart breaking. They mate for life and live as long, if not longer than we do. They meet at the breeding site each year. When one doesn't show the other one pads around looking so upset and confused.
Line fishing in international waters is affecting them very badly. I think they are one of the wonders of the world

matthew - Hi Matthew - One problem, you've left no address. I did manage to find the source and have added it under the photo.

apprentice - Thanks. I have long been an admirer of the wondrous albatross, so I feel very privileged.

Hey, congratulations!!! I love the albatross colony and Pilot's Beach below. I loved living on the Peninsula ... your blog always brings back memories of a home I love.

Anyway, enjoy your new job - I'm so sure you will.

Di - Thanks - I can't wait to start. Will be able to keep you posted on that part of the world.

congrats on the new job....what a dream come true!!! Would love to see some of K's photo's I'm sure they are wonderful.

Poor Jedi...getting old sucks...got cola from the kennels today..she had been ill while we were away...they had to take her to the vet.....we will have to follow up with a visit....blood tests etc to be done.

mcd - I'll see what I can do about you getting to see some of K's stuff. She took photos of a friend who is pregnant ... Sounds like pretty professional stuff.