Bring Back the Bike 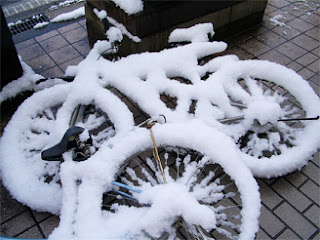 This is a favourite photo of mine. Taken by S when he was living in Toyama, Japan.

There is something admirable about bikes. Go here to read S's effortlessly-written impressions of bikes and life in Japan.

Avus has restored a vintage Raleigh bicycle. You can see what a magnificent job he's done here.
Such workmanship and attention to detail I can only gawp at in wordless admiration!

It put me in mind of a poem I wrote about ABM's Raleigh bike.

Loose-mudguard rattle, sixties'
teal-and-white
and your faithful charger
on through the seventies
and eighties.

The only thing it guzzled,
your energy. One day
in the nineties
just before you finally
dumped it,

the boys and I spotted it
parked in its usual bike rack,
a donkey in a stable
of mountain-bike thoroughbreds,
a tin fork

in a canteen of silver cutlery.
To them, an object of ridicule
and shame. Already they'd forgotten
the familiar kerklunk
over the driveway's kerb

and the brake's strangled screech
outside the front door,
their cue to hurl themselves
headlong into your handlebar arms.

An old bike also featured in a poem of mine ABM read out at M&K's wedding. 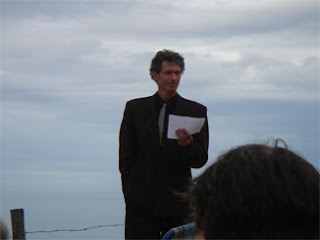 Saw it, loved it, bought it at the tip for four dollars,
an old-fashioned bike with a red, round, winking tail-light,
a torch-shaped front light driven by a dynamo, a carrier
and - this is the coup - 'straight handlebars'
(their hands draw them for us, square in the air.)

It's another of their lame ducks - they have an eye
for such things, M&K. They're into classic retro.
He wears his father's cast-off 80's t-shirts. They prefer
the calmer waters of this 21st century's white-water
rush; the slipstreams, where you find discarded treasure.

I got my first bike when I was eight years old. That was also when I got glasses. So there I was, this scrawny little thing with a short haircut and fringe, big front teeth, freckled face and pink-framed glasses, riding my new, sapphire-blue bike along a quiet, gravel road. As the humming tyres ate up the road underneath them, it seemed to me that the world had suddenly become far more manageable. I was riding the top surface of the planet earth. I was going places and getting there faster.

Great poems and great memories too. Bikes are wonderful for the freedom they give without removing you too far from what's going on around you nature wise. I love going for a spin on mine.

Your poem was a beautiful breath of fresh air. I could hear every sound. Excellent! XXOO

There are many bikes in my past also..you just made me remember them.

The photo is great too.

Glad you're on the up girl. x

Wonderful wonderful words here CB! The pic at the top is super too. :)

This is a lovely collection/ode to bikes. That photo is terrific too! I am a huge fan of bikes and must take mine out very soon.

I am a cyclist. I ride and race mountain bikes. I just "stumbled" over your blog and saw the picture of the snow covered bike. Great shot and beautiful poems:) Thank you!

oh god, chief, thanks to you i remembered how much i loved my childhood bike. it was my first taste of independence.

you are a fine writer, as always. nice to have you back!

Lovely post cb. I used to cycle with my Pa on his bike ( the one in his post) and me on my red bike.
You have brought back some great memories .
Thankyou.

CB,
I like S's shot of the "snow bike". I've seen a few renditions of that over the years. Bikes have been a part of my lfe from age 6, my first...with training wheels, that I was loath to give up, to my current mountain bike. I still feel the same exhileration when "flying" down a hill.
rel

nice post! Bikes have been on my mind lately too. I'm trying to ride a lot while it's still warm enough to do so!

My first bike was a blue Schwinn!! I had training wheels on it forever and my dad told my mom he feared I wasn't going to wean away from them. She didn't tell me till much later in life but it still hurt my feelings. Great poem.

Thanks for the great poems, Chief - especially the one about the "Raleigh". Thanks also for your "plug" of my blog (payment on the way).

Bikes are great.
Love the idea of you zooming along on your bike as a kid... like so many that I know. Wind flying through your hair, grin on your face.
So great.

Great post. I love the photos and poem. Now that I finally have a car again, I'm worried about neglecting my bike.

cailleach - I should give it a go again maybe ... don't they say you never forget?

wendy - Everyone has a fav. bike memory it seems. Maybe it's got something to do with independence. Striking out on one's own.

cyn - There's just something beautiful about bikes I guess ... maybe the wheels give us wings!

shameless - The pic is our son S's. I just love it.

pp - Thanks. Biking in Paris ... now wouldn't that be fantastic!

velocc- Thanks for your Hi. Happy biking!

kj - Hi! Yes I am sure our first bike gives us our first taste of independence (after walking, that is, but few of us remember how it felt to take those first steps. Yet we do remember the feeling of learning to ride a bike.)

herhimnbryn - You can thank your Dad for both then because his post about the Raleigh restoration actually triggered this post.

rel - It's actually been a while since I've experienced that sensation myself ... I wonder if I ever will again?

bug - That's good. Maybe in the light of carbon emissions, the bike will in the end save the world!

cs - Thanks for dropping by.

becky - Thanks. You were very wise to stick to your training wheels - my many skinned-knee incidents bear testament to that! ;)

scarlett - You've got the picture!

michelle - Hi there! I'm sure you'll never forget your bike - a car is just not the same huh?