Work is so much better since I 'gave myself a good talking to ' (as Barbara from Barbara's Bleeuugh put it.) There was also an adjustment made as to who I have to deal with on a daily basis, which has made the whole scene so much more pleasant. In the interests of privacy and discretion, unfortunately I cannot give you all the juicy details. Suffice to say, I now pretty much enjoy my days at the pre-school (although of course I would far sooner be at home writing ... and my daily instinct to flee is still a mighty strong one.) 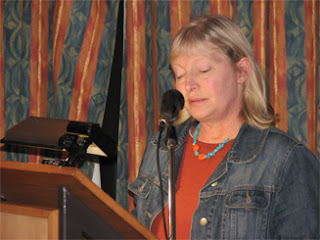 Last night ten women poets from Dunedin gave a reading to celebrate one of NZ's most famous writers - the late Janet Frame. August 28th was her birthday. I was one of the readers. I had a thoroughly enjoyable time listening to all of the other readers - each with their own distinct voice and style. As I said to someone afterwards, what a rich vein of poetry we have in our little city. May it continue to be mined. 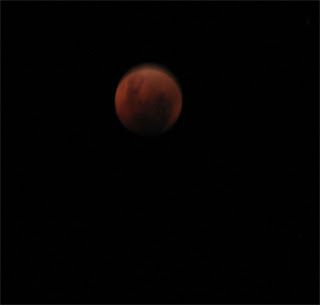 There was also a lunar eclipse last night. The sky was cloudy, but ABM was excited to see what he could when the ragged clouds parted. (See photo above.) I ventured out at one point to have a look. It was an extremely chilly night, so I didn't stay out for long. Still, a red moon only comes along once in a blue moon.

It's always cloudy when there is an eclipse. Last night was actually the first one I have seen in my entire life, for that reason. It was cloudy here too, but since the eclipse lasted a lot longer than usual, we had a good clear patch for long enough for P to get some good photos.

CB,
We,fortunately, had a crystal clear night. I was up at my usual 4 AM and saw the big silver disc high in the sky and watched the entire process until the eclipse was complete at 0552. It was a magnificent sight.
rel

You look great in the pic, CB. Love the denim jacket and I bet you were wonderful. Your book has just arrived and I am eager to start it!!!

Great shot of the eclipse CB! I wish you could read a poem from your book on your blog. I think that would be a real treat! XXOO

catherine - Yes the fact that it was around for a long time gave everyone a fair shot. BTW, Bon Voyage!!!! Hope you can blog while you are away.

tammy - I must look into how I can arrange a reading ...
Warning: my kiwi accent will only make you laugh. :)

chiefb... sounds like fun. And some beautiful pictures. We saw the lunar eclipse here too. Well, I was asleep, but I saw the after pictures. ;-)

How do you do that reading out loud part???..I swear, it makes me sooooo uncomfortable. If a microphone was plunked in front of me...I would just faint. That, or get sick.

Even in class I hate to read what I've written...I don't mind writing it....

my first intro to Janet Frame was the movie Angel at my Table.

here in central california had a great view of the eclipse at 3 a.m.

found your blog via Dharma Bums...i think...you know how you get lost in blogland....

greetings, my friend! Thank you for the picture--in the East we missed the eclipse this time around, but I believe it was the last one that we got to see. What does go around comes around again, does it not? Blessings...I am still here and vow to begin blogging again! Much love from a desperate housewife...

My son went out and looked for the red moon, but couldn't find it. Thanks for this great picture! And, speaking of great pictures, that's a fine one of you --you look so young and pretty (but then, of course, you ARE!)

PS I am really enjoying your book!

I rather like the shot of you reading - I love the colours...(which match the curtains, I notice - but that's not why I like the photo!)

wendy Practice has a lot to do with it I guess. Thanks for the compliment :)

pepek - Soft light does wonders to an aged face! Glad you're enjoying - I still intend to order your book too.

debr - I will tell ABM about how you admire his skills at taking lunar eclipse pics!

clare - Yes I laughed when I saw the pic and saw how I toned in with the curtains - didn't notice on the night at all.

we had a lunar eclipse last autumn/winter. Loads of people wrote haiku about it.

Your picture looks great - you should keep that for promotional purposes! :)

You look lovely. It sounds like a good night in good company. I know what you mean about being cold photographying the moon. Good capture too, you'll be buying a tripod next.

I missed it here, it was cloudy. Glad to see this photo of it.

CB, did you know that "Made for Weather" is almost sold out on Amazon.com? They said there were two left - but there's only one now! ;)

I enjoyed reading your post on giving yourself a talking to. If I could learn that skill I would be much better off! I'll try to learn from your example.

cailleach - Thanks for the compliment!

apprentice - We do have a tripod. Maybe we should use it!

scarlett - it was a privilege to see such a sight between clouds.

Wish I could attend one of your readings.

rethabile - Let's hope that one day you can - and that the favour can be returned.