Was The Coffee A Free Trade Brand?

This is a Sunday Scribblings post where the prompt was 'Hair'. 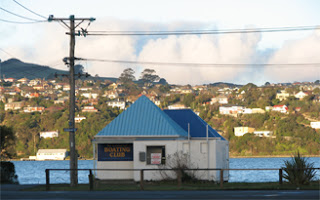 Today my friend is wearing her hair up, which accentuates her eyes. A little loose bit not caught up in a black butterfly clip at the back, moves when her head moves.
She says that she is feeling her age.
We are both the same age - which is of an age where we are about to be (if not already) sidelined by those much younger.
After reaching forty, age becomes a 'thing.' Younger people are often puzzled at how much we older people mention age in conversation. Don't they realise how much it is a crisis of confidence?
After the age of forty, we can no longer rely on youth to get away with things. From now on it's all up to our wits and whatever wiles we have managed to acquire in those forty years. Until then we have managed to get along (just as young people are still doing) buoyed by the feeling that we own the world.
In a restaurant down on Dunedin's quiet (read: deserted) waterfront, we drink coffee and look out at the harbour view. 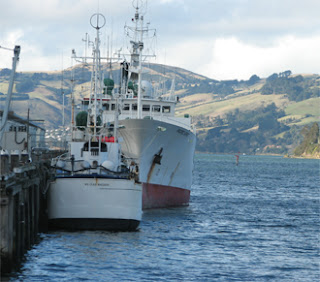 The sun's retreat leaves a fat shadow over the peninsula hills.
We agree that we are lucky. We aren't going to be jailed for writing or speaking against the government. We don't have to think about where our next meal is going to come from. We don't have enemies.
I think about how I probably should be more of a political animal. Greenhouse gases spring to mind. I salve my conscience with the thought that after my coffee ... I briefly wonder if it is a politically correct brand ... I am walking back home.
I don't mention it to my friend, but today I'm having an unwashed, funny-hair day.
Why is it, I wonder, that if I don't wash my hair every day I feel less than human? And yet I remember that as a child, our family only ever had a bath on Saturday night. Daily showers were something Hollywood actresses had and only became part of my life in the late seventies - or even later. I can't actually recall the exact time. Yet we survived. We weren't too rank. Maybe all this cleanliness has got a little out of hand. Would my carbon footprint be smaller if I washed less?
My friend tells me her husband went through a stressful time in his early forties and his hair began to go grey. Then when circumstances changed and the stress lessened, the grey hair grew out. I don't know how grey I actually am because I keep it covered. Even from myself.
My friend and I say good-bye. She's off to RPM classes and I'm walking home. I apply chap-stick on my lips and pull a red, possum-fur beret over my head. Possum-fur clothing may be an alarming thought to some, but it must be remembered that possums are a notifiable pest because they chomp through our native trees and plants.
There is a sharp, bitter wind. As I stride into it, I have to keep freeing wisps of my hair after they get stuck on my chap-sticked lips.
- July 15, 2007

CB,
"A crisis of confidence." Golly, isn't that the understatement of the year. ;-)
rel

I spent a month in the hospital in my forties with a possibly life-threatening condition. When I got out, I suddenly felt much younger. I figure I've got a lot of living to do, so I try not to make age an obsession. It's hard sometimes, though.

Beautiful piece CB. I can remember when baths were a once weekly affair as a child, it was really only after I went away to uni that I started taking much more regular showers. My Mum's house still doesn't have a shower, which drives me mad when I go there. Maybe we should do as the Japanese and share bath water (they wash first before they get in).

Remember though 40 is the new 30. I think that though there is still ageism around, people are much more open to people taking on new experiences whatever your age. I don't wash my hair every day, its too long for that and luckily not too prone to greasiness.

As my hair is too long, I wash my hair once a week after a oil massage and it is none too worse for that.

I too believe that squeaky clean hair is over-rated.

I love all the images that you evoke in this piece.
Great writing!

I love this post... and yes, losing and graying hair causes a crisis of confidence. :-)

I'm facing 40 in a a little over a year--I'm trying to embrace this new person as I let go of my old self.

I don't wash my hair every day either--we do tend to overdo it with our products and shampoos and such.

A crisis of confidence - you said it, sister! I try to remember that age is an attitude, not a number, but everything is changing and there can be no denying that. Lovely post, so full of truths.

What an engaging piece, and the photos were excellent... thank you for sharing this little slice of yor life!

"After the age of forty, we can no longer rely on youth to get away with things. From now on it's all up to our wits and whatever wiles we have managed to acquire in those forty years."

This is exactly how I feel. I just turned 40 and I feel like this is my "put up or shut up" year. I can't get away with "someday I'll do XYZ". I need to acknowledge who I am and be happy with it.

As for the bathing thing, an interview I heard with a dermatologist has stuck in my head for years. She said that after 35 people shouldn't take daily baths because our skin doesn't retain moisture the way it used to. She recommended a bath once or twice a week and just wash up the stinky bits the rest of the time.

rel - Hmmm. There's such a fine line between confidence and bravado, don't you think?

betty c - I imagine something like that can jolt us into a sense of being more content to be alive and to heck with how old!

cgp - Yes I agree with all you say.

gt - I bet your hair looks more beautiful for all that treatment.

tori - Thanks so much.

cyn - You're right about that. It's also when we reach for our inner resources - never a bad thing, as I believe it makes us a more profound person.

january - Thanks. There is that sense of freedom that comes along with the inevitable sense of loss ...

pp - Thanks. What you said about attitude is a good thing to remember.

rob kistner - Thanks so much.

dani in NC - Thanks. Interesting thoughts - giving me something more to think about.

I love the way you make a beautiful piece of writing out of a commonplace event. As for daily hairwashing, no way. My hair is very thick, ie there is lots of it, but it is also fine, and when just washed sticks out all over the place. It needs a few days to settle down. I certainly don't feel as if it's dirty if I wash it only weekly (though I do take daily showers)

catherine - Thank you so much.
The different hair washing styles is fascinating - I reckon a book could be written on the subject!

rebecca - Hi there! I am pleased my more elderly status is of some use! ;)

A lovely post. And isn't it interesting how we are all different. I've been going grey for a while and now my hair is certainly starting to thin out. But it doesn't make any difference to me.

I used to like a bath but now prefer showering. It's quicker and saves water. Take no notice of Kamsin, I do have a shower. It's attached to the bathtaps. She's just lazy.

I'm unsure what colour my hair is although when I leave the interval between colouring it too long, I do get some idea.

I'm with on wanting to wash my hair everyday, if I don't I feel like I never get going.

On age I've made pieace with it, like Betty C I'm grateful to still be around to complain about it.
Plus we all stay about 27 in our heads. I'd hate to go back to my youth - for one thing I'd have to do all this again.

paul - Thanks for dropping by and your comments. In the end, our hair is not what makes us!

carole - I find showers are quick and refreshing - a bath is more for relaxing and sinking into in. It's good to have both options. :)

apprentice - I agree with you Anna. You're so right.
And no, I don't intend to play possum!