Taking The Weather With Me

Thanks to Donelle, the publicist at Otago University Press, posters and email invites to the launch of 'made for weather'are ready to go.

The painting is by Son M. and was done especially for the book.

The launch is to be on July 27th, New Zealand's Poetry Day.

After the launch, there is a Poetry Reading featuring 9 Dunedin poets and I'm fortunate enough to be the featured poet.

Wednesday night after work, some of us got together at the 'Robbie Burns Pub' to discuss the prospect of getting regular poetry readings going again in this fair city of ours. After the slightly hurried 'meeting of minds', with some good ideas as to venues and format being tossed about, it is now a case of Watch this Space. I will keep you updated as to progress.

***
In a rash moment, a co-worker and I offered to go into to work today (yes! on Saturday!!!) to sort out a woefully neglected storeroom. (Why do I do these things?) As it turned out, there were no cars at home for me to use, and so rather than take a circuitous bus ride - Saturday buses are like that that - I opted to walk. 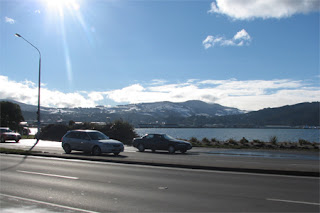 It only took an hour. It was a fresh (see the snow on the hills?) and sunny day. All the way, I vacillated between feeling like a resentful martyr and a diffident trooper. I looked around, and yes, I was the only one walking. Everyone else was in a car. 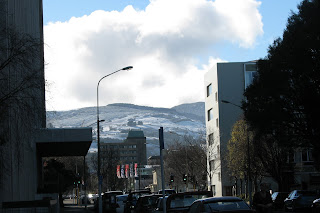 As I passed by the railway station, I spotted these two resting engines. Something about them appealed, maybe because they represent how I often feel - the little engine that could ... 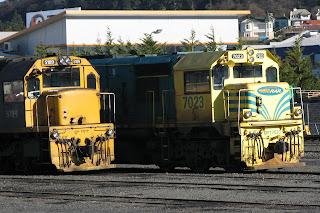 This car took my eye, with its cap of snow and Tweety bird and Taz car-seat covers. Classic. 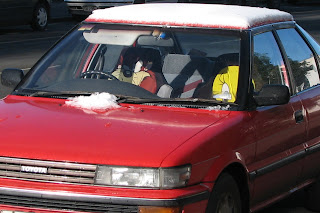 As I write this, the Live Earth telecast from Sydney has been playing. There have been film clips that really make you think about what this planet, with the help of humankind, is spinning into.
At the moment the kiwi band Crowded House is singing the last song, 'Everywhere You Go, You Always Take The Weather With You'.

I feel very virtuous walking all that way today. In the end, the trooper won out over the martyr.

Love the cover of your new poetry book, CB. You have had more success than me in changing the appearance of your blog. I'm having trouble getting things where I want them.

i too love the cover of your poetry book. i love all the photos you are posting too as you walk to work and go about your days. it's always so great to stop by your blog and i love the new look. i wish you ever success with the new launch. please let us know how it goes?

How wonderful CB the cover looks beautimus! Trooper it is in my book and what a lovely day for it! You go girl!

CB,
Good on you for getting that new book published.
You always knew you were a trooper or you wouldn't have started out. ;-)
rel

A Big Congratulations on your book!!! It looks super--your son did a wonderful job on the cover. I can hardly wait to get my own copy!

I love the cover! If we order from the publisher, will it be a signed copy? Or do I need to climb on the back of my lion and visit your book launch for that :)

great cover......tell M he did his mum proud. Wow that book launch is coming up fast....what an exciting year you are having...weddings, book launches....whats next????

Good on you for walking...we took a walk with the cameras today in the botanic gardens....got some great shots....

Congratulations on your poetry book. This is what all poets look forward to...good luck:)!

Lovely cover. I'm glad all your plans are coming together. I hope the book and your reading are big success.

Lovely cover. I'm glad all your plans are coming together. I hope the book and your reading are big success.

Hey there, don't forget to cast your vote in the lions writing circle contest. :) Only 3 days left to get your votes in at seak@caramail.com
See the circle blog for full details!

I like the artistry on the book, and I am excited for your reading AND your launch!

What a thrilling time for you, can't wait to read all about it.

Congrats on the book. The cover is splendid. M is gifted. Happy reading...

The cover of your book is lovely!
As for walking, it's always a source of inspiration for me.

Congratulations for your new poetry book. It looks so good.

The cover of your new poetry book is great - but I'm sure the poetry inside is even better. Can't wait to read it! And I'd say you're a trooper!

Congratulations! The cover art looks magnificent. Can you get your launch recorded so we can hear too...? ;)

I really enjoyed your walk to work too - and Crowded House were a bit big with me back in the 90s... ah, memories!

That artwork is sooooo beautiful ~ the perfect accompaniment to your writing.

carole - Thanks. I go to Layout, choose a template and then use fonts and colours facility to change the background colours etc.

leonie - Thanks so much Leonie. I am glowing from the effect of all those accolades!

tammy - Thanks for that Tammy - I can feel your support like a hand on my back.

pepek - Thanks. I really value your support.

catherine - By all means come to the book launch with lion! But in case that's just not feasible, I am told any pre-ordered copies can be signed at the launch and then they will be posted to the buyers.

mcd - Yes the year's a little too exciting - I can't get to sleep these nights ...
Must go and see if you've posted the shots you took in the weekend.

sorceress - Thanks so much.

apprentice - Thanks for your kind and supportive words.

scarlett - I will let you know all about it.

rethabile - Thanks so much, of course I'm biased, but I too think M is gifted.

nienke - yes I agree - walking is a marvellous way to compose poems.

guatami - You are very kind, thank you.

I want a poster!!!!I will order the book, of course...but I love the cover art!

Look what a great son you have made. I'm sure all the children are equally charming.

BRAVO to the both of you! such talent!

Can't wait to get the book, CB!! I hope your employer knows you are such a trooper....

wendy - I will email you a version if you like ...

Thanks for the Dunedin pictures -- looks like a REALLY cold one.

The cover of your book is brilliant. Talented Mike.