The Blue Oyster and Pumperknickers

I guess every country has a shameful past to a certain extent.
Not far from where I live is this door in a cliff. 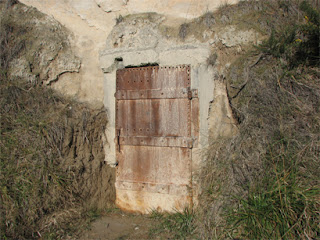 It may look cute, but it is widely believed that it is where Maori war prisoners from sometime the 19th century were kept. Behind that door is a dark and rudimentary cave where it is reported they slept at night. During the day they were made to work on the stone walls that are such a feature of the Otago Peninsula, 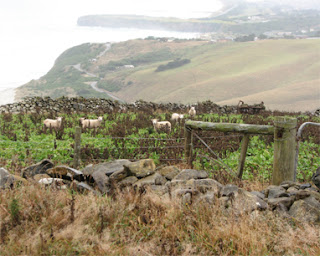 and on the roads around the harbour. Some of these men were taken far away from their wives and families in the North Island and shipped to the South Island, simply because they made a peaceful protest and refused to move when their pa (fortified village) was invaded.
This memorial was erected in memory of those who died and never returned to their families. 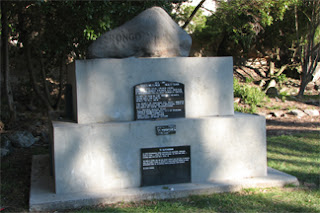 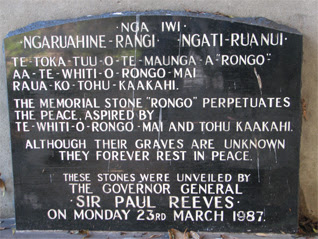 On Tuesday night we went to an exhibition at the Blue Oyster Gallery. The whole space has been transformed into a bright splash of colour made up of thousands of small paintings contributed by over 200 artists here in Dunedin. One of the artists is Son M. The paintings are unnamed, but we could easily pick out all of M's paintings.
The space is a basement that has arched stone walls and a labyrinth-like atmosphere. There were so many people there that I got quite claustrophobic, and as visions of what would happen if there was a fire leapt to mind, I made my way nearer the door.


As you can see from this photo taken on Sunday, last week's snow still remained on the hill suburbs. However, it has now largely disappeared. The building in the foreground is the Dunedin railway station, taken from the business end. 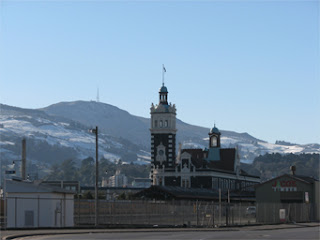 This winter is a particularly hard one. Temperatures are dropping to minus 10 degrees celsius at night. Some people have had burst water pipes flooding their houses. It is certainly hard to get out of bed these cold mornings.
Today at the pre-school we made honey water for the birds and discussed how ice is formed.

Last night was a treat, I had dinner with two families I used to be nanny for. The restaurant where we all met up for dinner is called 'Pumpernickles'. However, three-year old JD prefers to call it 'Pumperknickers'.

Hi CB, it is sad but true how all countries have a skeleton or two.

How proud of your son you must have been over by the door. lol Me too!

Interesting! And I am sorry it's so cold. I wish I could wrap up some of this heat here in the blazing west and send it to you via Air Mail Priority Express....

I tried to find where I could pre-order your book but that website didn't take me to anyplace but various university sites that had nothing to do with your book....I shall try it again later.

Have you checked the results of the vote at the Shameless Lions site? Or been e-mailed about it? Congratulations!
It's cold here, too. We have a quote for $16000 for installing a heat pump system throughout the house. It occurs to me that if we had $16000 and invested it, the interest would more than cover the extra electricity bills for running ordinary cheap heaters from the Warehouse all winter.

It's cold In Welly too ... I'm in the spare bedroom and its so cold my fingers have wrinkled up :O(

Interesting about the cave prison ..>I had seen a doco on the maori wars a few weeks back but it didn't mention too much on the treatment of prisoners ....

The history is so tragic, and still very fascinating.

Very good photos, thanks for putting those up!

Honey water for the birds? I've never heard of that, I may have to try it!

Pumperknickers... SOOOO funny, that thud you heard was me falling off my chair laughing. Good one.
Art Linkletter was right, kids do say the darndest things.

...it's so strange for me to see snow and hear how cold it is there, we are in summer here... so hot, sunny... long days filled with lemonade and ice cream. Sitting poolside and riding with the top down.

So, it makes me need to ask... what is Christmas like for you with no snow? I can't even begin to wrap my mind around that.
...I'll be back to find out though!

OH! And congratulations on the wins over at Shameless'!!!!!

I voted for you twice, I'm SO excited that you won!!!

tammy - We are all guilty of not loving other human beings enough ... and we never learn from history it seems, going by what's happening in a world we thought (in the 70s) was going to be enjoying universal peace by now. I am afraid the reality is that there never will be peace on earth. Human nature is an appalling thing - and yet, it can be awesome when compassion rules. (Sorry about the sermon! :)

pepek - I want some of that heat too!!!
re the pre-ordering. I'm afraid until the book is on Amazon (and I don't know when that will be) you have to order by email. I'm not sure what happens after you've emailed the address on my sidebar ... I guess the publisher gets back to you and payment and postage of the book to you is arranged ... Sorry it's not straightforward ...

catherine - I had no idea! Thanks for the alert. I am rather chuffed!
I can't get over the cost of that heat pump system!!! We are wood burners, I am somewhat ashamed to admit.

dinzie - Yes it's a rather chilly winter this one. Alexandra has had minus 3 degree days. I am SO glad we didn't move there!!!
re the Maori prisoners ... it's not a well-known - or advertised? - fact. Dunedin's not proud that some of the stone walls that look so picturesque, have in fact a shameful history attached.

scarlett - Thanks, you are so kind.
Those days by the pool sound rather fantastic at the moment to us over here!