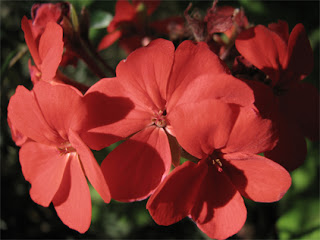 Most of the photos featured on this blog are of the remainder of flowers in our garden. The ones left behind, struggling to weather the winter before they finally succumb. They symbolise a bravery and doggedness I can identify with to some extent. 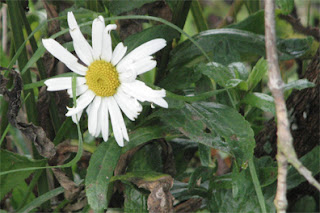 Winter's barricade works surprisingly well. We scuttle indoors at the end of the day and close the curtains on the clammy, cold evening. And hope that we don't have to venture out. Ever. 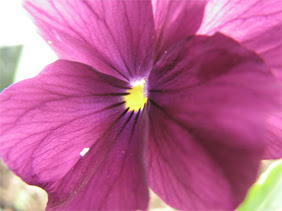 In the morning it is cold and dark. Frost has to be scraped with credit cards from windscreens. The traffic creeps along icy streets. My daughter's partner K said that he hears the grit truck going past at about 5.30 a.m. Sometimes his is the first car on the road after the grit has been spread.
I enjoy the cold, dark walk to work after ABM has dropped me off. Part of the walk is through the Botanical Gardens. Sleeping ducks look like large shoes abandoned in the middle of grass white with frost. At the edge of the paths, small, dark hedge-wrens run like mice. Bare, scarecrow-trees form broken-wax patterns against a lightening sky.
When the sun appears, some of the children, armed with magnifying glasses, take a closer look at the glittering crystals of ice. The sun appears, bright and sharp as a knife.
And then at about four o'clock, it slips away again leaving behind a clammy coldness. By the time we arrive home again, it's dark. We light the fire and draw the curtains. 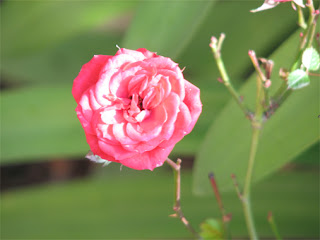 However, despite the sense of siege one gets from winter's constrictions, there have been some bright incentives for us to weather the dark cold and drag ourselves away from the fireside. My birthday dinner on Monday night was one. ABM and I went somewhere where we knew there would be a roaring fire at our backs and hearty choices on the menu. We made a good choice in going to The Esplanade Restaurant in St Clair, where we enjoyed warm bread and seafood chowder, followed by a pasta meal which neither of us could finish, we were so replete. On the way back to the car we stood for a while and watched the sea, as in the darkness it sucked back and then surged forward, a foaming mass crashing into the sea wall. 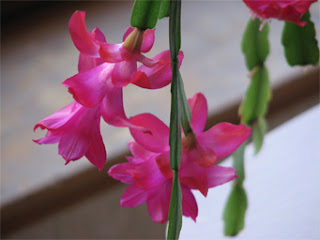 The next night the family were around to share cosy pizzas. S rang from Japan. He had half an hour between his teaching classes to talk. All eight of us were able to speak to him. He said the weather there was muggy and hot. That was hard for us here in Dunedin to believe, with a hard frost forming outside. 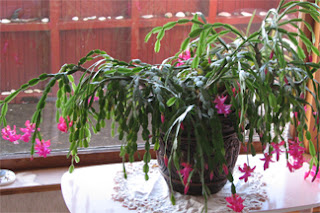 Sometimes it's hard to restrain myself from sharing all I'd like to on this blog. But as my real identity is known, alas I cannot say all I would like to about certain things. Suffice to say there is nothing sweeter than having a good old gossipy gripe. And that's all I will say about Wednesday night spent in a certain coffee bar after work with a certain other person who shall remain nameless. 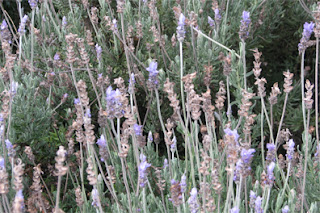 And now we come to Thursday night when ABM and I attended a play written by Martha Morseth. 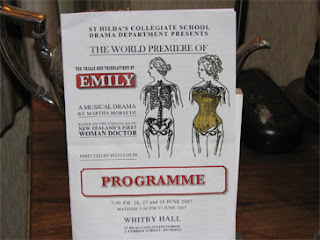 It was such a treat to witness the finesse, confidence and stage presence of the young women actors. It was a play about New Zealand's first female doctor. Set at the turn of the century in Dunedin, the dialogue, characterisation, episodic incidents and music that the play incorporates, transports you to those times. We get a genuine sense of what it must've been like to be a young woman launching herself into an established male domain. Dunedin once again demonstrates how much of a thriving centre it is for the arts. Martha Morseth, the writer, and Sylvia Duff, the director, as well as the talented St Hilda's high-school students involved in the play (especially Nina Wright who played the lead character of Emily) are all examples of a rich, cultural vein in this small city.
When ABM and I left the theatre, we were buzzing with the experience of having seen something special as we walked out into the frosty air; hard, clear and sharp. I think the mark of whether something has been an experience rather than just plain entertainment, is if it remains with you long after you've seen it. This play has that quality about it. I have found myself going back over it, seeing the faces, and hearing the voices like echoes in my mind. A sure sign for me that this play is a goodie. 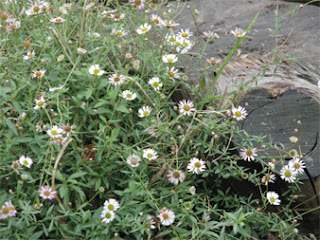 Friday night after work we attended a book launch. The next book launch to be held there will be my book. ABM and I got a glimpse at what the cover will look like. It is a little different to what I had envisaged. I'm sure it will look right once it is all done and dusted. There is nothing I can do about it now anyway. At least they used M's painting; a beautiful thing. 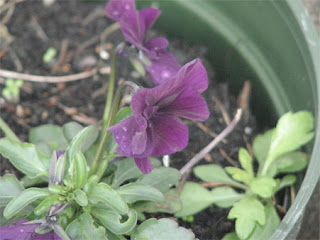 And that brings us to today - Saturday - a light, sunny winter's day after a night of rain. As the puddle on the deck-chair's seat shows. 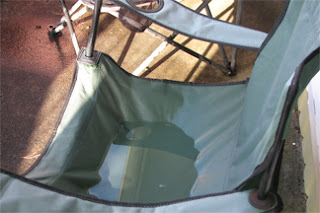 ABM played a game of golf and came home feeling a little better than he had been feeling. Again, I cannot say much about it. All I can say is that it riles me when someone with as much integrity and strength of character as ABM has, who always treats people with utmost respect; who is a rock, a pillar; is not given the same respect or support. Some PC tripe has meant he has been treated with professional disdain. I have probably said too much and may well end up withdrawing these statements. Meanwhile though, I will use them to employ a little payback. For my man.

These irises aren't from our garden. ABM bought them for me after I'd had a hard day at work. (Told you he was sweet.) 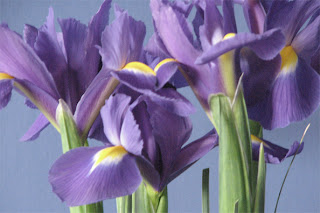 Beautiful flowers! It is still raining here in the UK, I'm beginning to give up hope there will ever be a summer!

I love the flowers. We are now in the midst of fire season (and summer). I forget why I like summer while I am here, but long for it in winter.

As for the ABM troubles, he will survive with such a loyal friend beside him.

oh dear....who could do such a thing to ABM!!!! You let me know and I will come and bite their ankles!!!

Very sorry to hear about ABM and the PC tripe. GRRRRRRRRRRR.

Stunning photos and the play sounded GREAT. Nothing like live theatre and I always forget when I'm away for too long.

Beautiful flowers CB. :) Stand by your man, I'm right behind you reading between the lines cheering.

Did I miss your birthday! Hope you had a great day!

And I love your flower photos.

I support MY man.
He supports me; in countless ways.
I understand you supporting YOUR man.
Strong men need as much support as supposedly weaker ones.
I bet, CB, ABM fully appreciates you.

Lovely flower photos. Even without revealing my last name on my blog, I feel that certain things can't be revealed. It always surprises me that some people don't realise that (and then cry boo hoo when they are sacked for something they wrote on their blog).
I'm glad you have such a sweet husband, and that he has your support. I'm sure that matters more to him than what others say.

CB,
Whew, What a full week you've had. I enjoy winter myself, but many despise it. I defy anyone who reads your well worded description of a winter's stroll to not find it just wonderful. I've said it before and it bears repeating; you see so much that is lost to other casual observers.
Like you, too many people who know me in real life read my blog. All in all I'm glad that they do, but sometimes I'd like to be freer to say what's on my mind! Rarely, but sometimes. Actually I have a blog that is not open called "anger management": wherein I do my ranting.
Good on you, CB for standing up for your fella!
rel

kamsin - The rain has arrived here too. I guess our planet needs it, but its distribution seems a mite uneven ...

cyn - Thanks. Summer's good, winter's good too - we need the contrasts. (Convinced?)

becky - Yes PC sucks a lot of the time GRRRR
Thanks for the support - might have to call you in!

jan - Thanks. I think we make a good team.

catherine - Thanks. Yes one can't be too careful - hope even saying what I have isn't too much; but I think I've managed to remain suitably circumspect.

rel - Yes a 'secret' blog might not be a bad idea.

I love the wet seat, it says it all.

The play sounds good. Very exciting to think the next launnch will be yours.

Beautiful plants and glimpses of the persistant sun. Delighted to hear about your book coming so soon, you must be thrilled with that - you will let us know where to get copies, won't you?

Have a rel;axing w/e together.

apprentice - Yep. I think so too!

cailleach - thanks Barbara. Yes I will be posting details verrrrry soon.

herhimnbryn - Thanks - altho' that might be hard with ABM going over to Q'twn to visit his parents ... :)

I have LOVED strolling through your garden... thank you so much!

What lovely photos, and sweet visits through time.