Some images from today; a day of mild temps and sunny, clear conditions:

A silvereye feasting on berries. 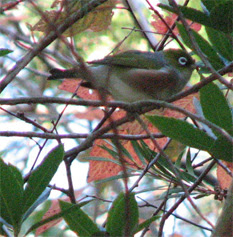 The view from out of the Customhouse Quay restaurant. 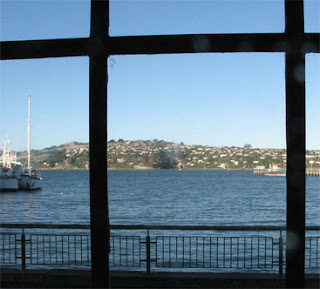 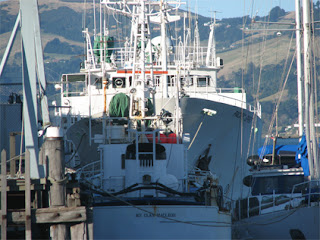 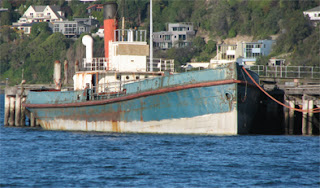 Street-lights on the jetty. 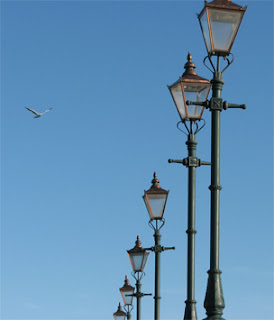 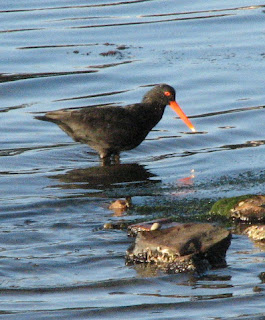 Writing: a prose piece yesterday * which will eventually end up in my 'navy-blue aeroplane' blog. Also jotting down ideas for poems. I think I've come up with a theme for the next collection - which is unlike me, normally I don't like to write to themes.
Reading: from my bookshelf: 'Berlin Diary' by Cilla McQueen (poetry) and 'Argonaut Rose' by Diane Wakoski (poetry). Also 'Amazing Grace' by Kathleen Norris (essays with an un-fusty take on Christianity.) And 'Friend of My Youth' by Alice Munro (short stories). I haven't quite made up my mind about Munro. That the writing is brilliant cannot be denied, it's just at times her take on life seems humourless and a little grim.
Gardening: some bulbs to lift and shift including the Naked Ladies who need a place in the sun!
Knitting: have a yen to knit another scarf, which will bring my collection to a dozen. (Still need a cornflower blue and a kelly green.)
Listening: to a cd made up for me by my friend C. It's a doozy! 'You're So Vain' by Carly Simon was the song I especially enjoyed tonight, but equally choice; 'Nine Million Bicycles' by Katie Melua and 'Song For Whoever' by Beautiful South.
Watching: 'Boston Legal' later tonight - even though it's verging at times on becoming a little toe-curlingly silly.
Also want to watch the penultimate episode of 'Huff', which I taped the other night.
... Is it just me, or is tv becoming 'so last year'. I think on the whole I am over it.
Apart from the yachting from Valencia, that is. There is something mesmerising about the sleek lines of those large yachts as they cut through the water and shimmy-shammy their way across the course. The wind factor, the jives, the tacks, the statistics, the maneuvers ... all have me hooked. (Except it is on at 3.00 a.m. over here.) 'It's a rich man's sport' is the main criticism I hear. I dunno - I just like the poetry-in-motion factor. I'd far sooner watch boats than rugby players, I know that.
And have I mentioned that the NZ yacht is doing rather well? However, with the crews being as international as they are, which country the yachts are from is almost a moot point. NZ (with some American crew) and America (with a kiwi skipper) are the top two boats. So. Our teensy country pits itself against the Big-un. Again.
- May 08, 2007

That's a lovely series of photos. The silver eye looks a beautiful bird and that photo is a work of art.

I feel similarly about Munro. I really like her writing, a beautiful economy of words that depicts exacting detail. And I like that she focuses on lives of women. The truthfulness of her stories can't be denied; yet, the grimness can wear upon you. I can read one of her stories but need to allow time -- weeks sometimes -- before reading another.

cgp - Thanks so much - I lik how the autumn colours in the background complement.

cam - Isn't that funny? That's exactly how I feel too. I can't bear to open the book again just yet after reading the first story. And it's been years since reading the book in the first place.

I love Alice Munro, too. Something about her characters reminds me of my mother sometimes and her sisters. Upstate New York, though Munro is Canadian, I think?
b

Oh, that black oyster catcher is quite a handsome fellow! Great photos.

Also good to check in and see what you're doing. I used to read Diane Wakoski a lot when I was younger. Thanks for reminding me of the pleasure in her poems.

becky - I'm ambiguous re Alice Munro - can't decide if I like her writing or not. Yes Munro is Canadian. Is your Mum et al a little like the family characters in Marilyn French novels?

I feel that about taking a break between Munro short stories - but then I always feel like that between good short stories. Some are so intense it feels as though my mind needs time to recover. I want to savour and let it have its own spac before I let it merge into another.

I too love that picture of a Silver Eye. Another lovely glimpse into your world.

clare - Thanks - the silvereyes are very busy at the moment around here - autumn abounds, but winter will be a little leaner.

You're getting your eye in with that camera, that's for sure. Meant to say if you want good quality shots make sure you've set the camera to the biggest file size, you'll get fewer shots on the card, but more pixels to play with.

A guy in our writing group has just left Scotland to sail for the next three months. It must be hard work though.

Apprentice - Thanks - another helpful tip! I will make sure I do that.
I think people who sail out and away on the ocean for long periods of time are the bravest of souls. I know I could never do it - terra firma - that's for me!

What was the rust-bucket called before it became one?