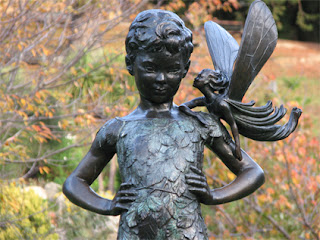 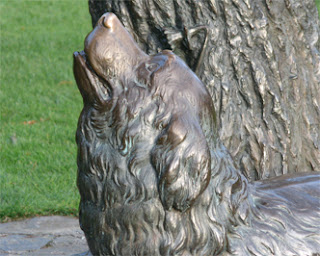 And if you know the story of Peter Pan, you know that this is the Darling family's Newfoundland called Nana. Note how over the years her nose has been rubbed shiny by thousands, maybe millions, of hands. 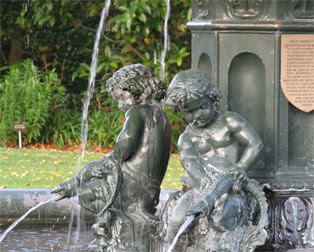 These industrious fellows are holding fable-creatures shaped like some sort of dragon-fish whose spurting mouths form part of the fountain. 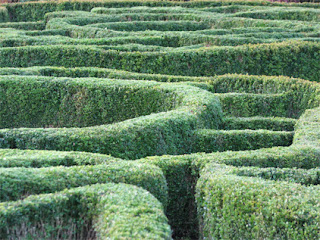 A rather wonky box-thorn maze of which I am very fond. It has a casual, meandering air about it. Maybe because it hasn't been clipped to within an inch of its life. 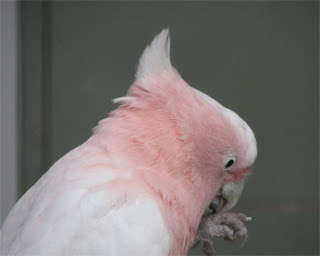 This was my only successful aviary shot. I was pleased that I managed to catch something of the characteristic parrot-y gleam in his eye. There is something compelling about the knowing glint in the eye of a parrot. 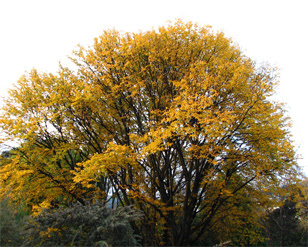 And there's something too about a tree. A stillness that belies the fact that there is a gurgling, bubbling factory inside each one.

(These photos I took while waiting for the call from son C to say the first of his two bothersome wisdom teeth had been removed, and he was now ready to be picked up. This is the son with the broken ankle. He is a bit of a wreck at the moment, however despite the discomfort of ankle and teeth, he manages to remain patient and cheerful.)

Yay! This takes me right back to the DBG, only it looks even prettier in these photos. The statue shots are wonderful.

I agree about the parrot-glint.

I have such a fondness for Peter Pan...

By the way...love the new persona!

Great photos - this looks such an interesting place...and I love that bit about the tree. Also very keen on the word Dunedin. I wonder where it comes from. It sounds Gaelic to me.

i LOVE that statue of peter pan. it jsut made me break into a wide smile. i LOVED it!

your shots are great, chief. what fun.

ps hope all is well with you!

ps. love your new avatar too.

I want to stroke that maze!

Great photos--I like the maze garden. And your new photo is fabu!

Katherine - Thanks! I was lucky to have the setting sun shining right into their faces. It's a lovely little park isn't it? Glad you enjoyed your virtual re-visit.

wendy - Glad you like the persona - it's my alter ego!

clare - Yes, you're quite right - Dunedin is the Gaelic word for Edinburgh!

january - Thanks - the maze is amazing - crunch! Sorry! ;)
Thanks fo rthe votes of confidence!

you have a gift for taking photographs.

I feel that I'm there.

CB,
Delightful and picuresque photos. Peter is my fav. Must be the childhood thingy.
Sorry about C's woes. Fortunately he has youth to speed his recovery.
rel

Hello,
I found you through Paris Parfait. What a gem your blog is.
I love the photography. And the wedding is wonderful.
I hope you stop by Robin Sherwood frecklefarm and say hello.
best
Robin

michelle - thanks - you're a honey.

robin - thanks for dropping by and your kind comments - will certainly repay the visit.

I love the parrot inspecting its nails. Polish to match its feathers would be difficult. Such a subtle shade of pink.

becky - That is just what it looks like isn't it?