Yellow flowers will always remind me now of M&K's wedding. K chose flowers like these as part of her bouquet. 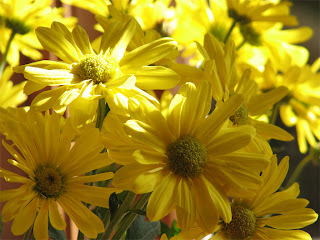 ( Unfortunately, I haven't any wedding photos yet to post.)

The setting for the wedding ceremony was a backdrop of ocean and sky. The walk from where the cars were parked was along a track – like a sheep track – that wandered up and around a bluff. Natural stone walls are a feature of the area around there, so part of the walk was alongside stone walls.
High heels were not recommended shoe attire – as more than one guest found out. As we straggled around the corner, we came upon a natural amphitheatre below a small hillside scattered with pale rocks and covered in long, dry grass. Here, the guests could sit in tiered positions and look out at the wedding party and the ocean. To the east, white waves curved on to a small beach far below. You will be happy to know there was a fence between the cliff face and the ocean, so there was no danger of the bridal party falling off!
Jedi the dog was part and parcel of the wedding party as well and made herself at home wandering among the guests and sitting down in the long grass, looking quite at home and very chuffed.
The weather was perfect. It is a site well known for its exposure to any wind that blows. Which is most days. However this particular day it was miraculously still and calm.
Fold-up chairs had been carried in for those who needed to sit in more comfortable seats. A small table had also been carried in for the signing of the register. The service itself was short and sweet. M&K exchanged the old-fashioned version of the wedding vows. And were married. I cried.
Straight after the vows, Jedi (as if scripted) wandered up to the bride and groom and put her nose in their hands, as if congratulating them.
Son C (one of the groomsmen) was at the wedding on crutches. On Wednesday night he was bowled over by a car which took off from traffic lights just as he stepped out. The light was green for him to cross, and so the car had gone against the lights. He had friends there to witness what was in fact a hit-and-run, because the driver (a female) hadn't stopped, even though C had bounced off the car's bonnet.
And that’s not all - the best man B. broke his finger while playing rugby and on the night before the wedding was in hospital having surgery. He came fresh out of general anesthetic to attend the wedding and looked very pale and wonky. Two Nurofen Plus tablets (which luckily we had in the house because of C’s ankle) were quickly administered.
The happy bride looked very pretty dressed in a white, sleeveless dress with a 1920s look to it. She had her hair pulled back with a veil that flowed from where her hair was gathered up at the back. And the happy groom was dressed in a dark suit he bought new and then (unbeknown to us, his parents, who’d been very impressed with the fact that he of all people had bought himself a suit!) splattered the corner of the jacket and the side of the trousers with bright splashes of primary-coloured paint. When his aunty from Australia rang to wish him well, she asked him what he was doing and he said, “Painting my suit.” He also added small safety pins instead of buttons. He wore it with a white tie and looked awesome.
Son S from Japan (who had lamented that he couldn't make it over for the wedding) surprised us all by walking in the door on the eve of the wedding day, saying,"It's my brother's wedding. I couldn't miss my brother's wedding."At the sight of him appearing like a vision through the door, I did a two-second double take and then screamed. Tears and laughter followed. To us it was as if he had been beamed over, a-la 'Star Trek' ... But for him it had been a tedious, seemingly endless journey of 32 hours. One which he then had to turn around and repeat after a little over 48 hours. 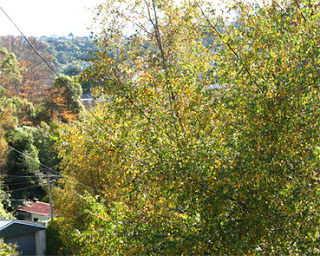 When I look out our windows, autumn colours are deepening in the trees. 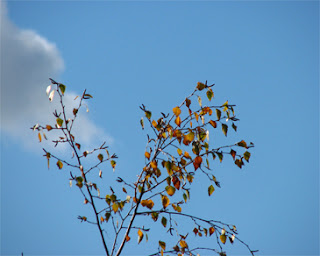 The light on sunny days is soft and mellow. 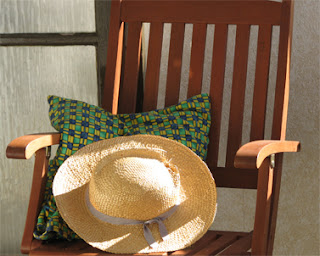 Unlike the day I took these photos, the last two days the weather has been fuzzy with soft, light rain as a misty, coastal drizzle sweeps in from the sea. 'Scot's Mist' is another name for it. Despite the (usually cheery) chemist-shop assistant's glum sigh today, and her plaintively expressed doubts that the weather was ever going to lift, I actually like the way the misty rain closes in the city, cocooning us all inside a grey blanket. It sets off Dunedin's stone buildings beautifully. It is autumnal and fitting. Far from being depressed by it, I am instead inspired to write poems about mist and the sound of drowned bells.

Sounds like fun. Sorry I haven't posted in months. I writing up a storm though. :-)

oops missed the "am" So much for my writing ability.

The wedding sounds magical! There should be a dog at every wedding, imho.

What an eventful week -- I hope C. recovers quickly and that the driver is made to face her action and contribute financially. I'm sure S. will be glad he came (after the jet lag wears off).

Love the description of the mist, too.

Your sun showing up made me cry! Oh CB, it sounded so romantic and beautiful. Can't wait to see the bridal party! I'm happy your son was not seriously injured. XXOO

I love this description, CB. Sounds like something you'll never forget. Dreadful about the hit and run, though. That must have been really worrying.

The wedding sounds absolutely lovely. Can't wait to see some photos! Hope there are no more accidents for anyone involved!

CB,
What an absolutely beautiful occassion you had. Drunk with joy I'd say. ;-)
rel

That was idyllic (until I got to the bit about the accident!)What a wonderful surprise to see your "Japanese" son there - I bet you nearly hit the roof when he arrived!

Lovely to see you CB.
Shall return to read this properly ASAP

ah she lives after the wedding celebrations :)

Sounds a delightful,wonderful romantic setting and a very lovely day for all...sigh

I can picture it with your excellent description! :) Congrats!

I read the later post first. I was amused by your account of your son's suit. My brother met his future wife just after he was run over by a bus. 32 hours from Japan and we thought it was a long journey when it was only 12 hours. No wonder you were emotional!

Sounds so very special.
Love the description of your son's suit! Hope the other son heals well and the drivers is found.

The story of the wedding is so sweet and touching.

cyn - Thanks. I have been following your progress.

katherine - Jedi made the day in my honest opinion.
The driver has probably got away with it and C is saying Thank God for accident compensation ... I am saying Thank God it was his ankle and not his head.

Tammy - Yes 'sun' is more right than you know!

january - Thanks - they're up!

clare - thanks. Well ... it was just one of those things - I was thankful it wasn't worse.

kamsin - Thanks - I broke a glass and figured that was now it!

rel - The wine flowed a little, but mostly it was the joy.

avus - it was the cream on top. Without him there, there would have been regret - but him turning up made it perfect.

mcd - I kno you would have loved to have been there ... the celebration in October is just going to have to make up for it.

shameless - thanks so much.

carole - Thanks. So being run over by a bus can be a good thing!