Have I mentioned my fondness for apples and for tractors? 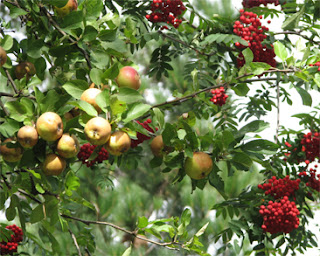 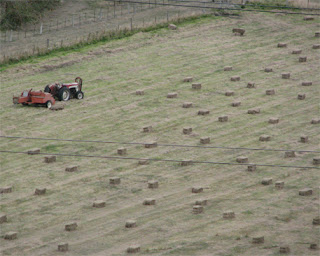 I also have a fondness for the 20th century method of haybaling, as opposed to the 21st century method with its gigantic, rolled-up bales sheathed in ugly, hospital-green. I was so pleased to see that some farmers still bale the old way. I much prefer the friendlier, chug-a-lug balers and the naked variety of chunky hay-bale.

For part of the Easter break, ABM and I went camping. 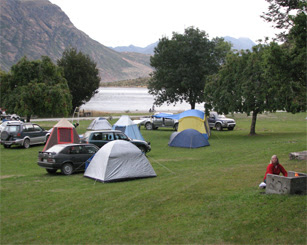 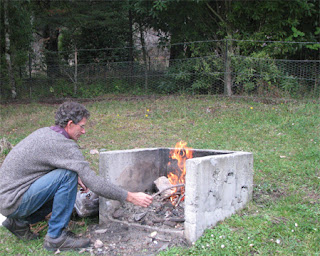 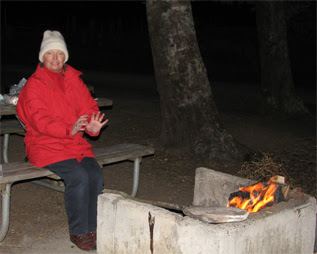 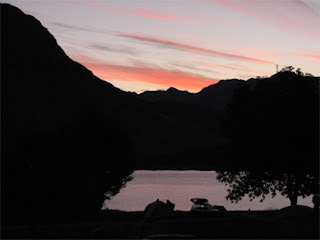 And as a consequence, my plan to take part in NaPoWriMo this month came to a sudden halt. Any hopes I harboured of writing a poem a day while 'on the road', were tested and found to be unrealistic. 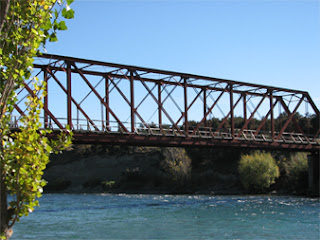 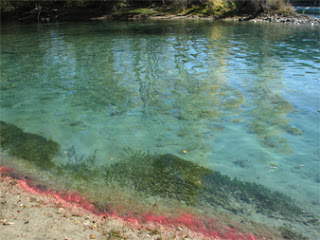 Largely because of my incapacity to concentrate on more than one thing at a time. 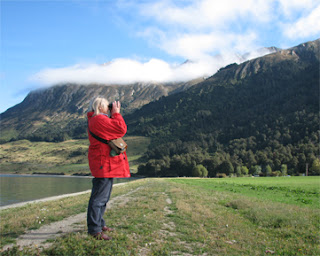 Checking out a pair of Paradise ducks with the 'nokkies' . 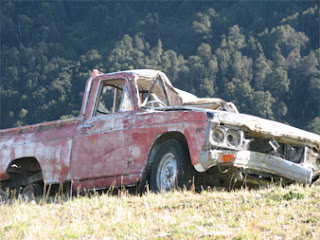 When I saw this abandoned truck just along from our campsite, I just had to take a photo - abandoned vehicles being another of my weaknesses (image-wise.)

***
It was time to admit defeat, put down the pen and 'take five', at first with ABM and myself on our own 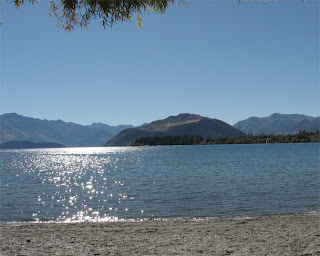 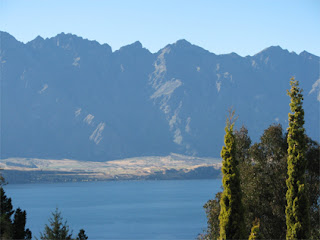 and then with his parents in Queenstown. This is the view from their deck, overlooking Lake Wakatipu and towards the Remarkables mountain range.

I did manage to write one poem. 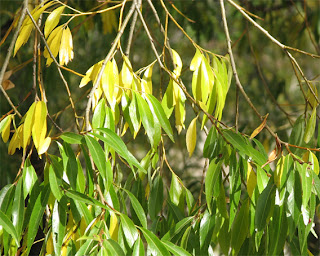 On a fantastic autumn day, the kind that reminds you why autumn has such a good reputation, I sat under willows that had leaves just beginning to change colour. I wrote while ABM played a couple of rounds of golf. I discovered that in the time he takes to complete 18 holes, I was able to complete a 'first' draft of a poem I was reasonably happy with.

By NaPoWriMo standards this is officially Day Twelve, however I am only up to Day Four. I am writing ideas for poems in a notebook with the hope of getting back to the writing very soon. Even if there's no time and space to do anything with it, at least the inspiration hasn't dried up.

Another thing that has stalled any hopes of keeping to the mark, was the startling yet deeply exciting news from Artist Son M that he and K are going to get married on Friday afternoon, 20th April. So. As we help them to organise a wedding ceremony that is to take place here in Dunedin, in a week's time, on a windy hilltop with an ocean backdrop, my life is in just a teency bit of a whirl.

Needless to say, I won't be back until the confetti has settled.

Wow! Huge news. I hope the weather is as good on the 20th as it was on your weekend -- that looked gorgeous.

Remember to take your camera coz your pictures are great.

You are a busy person! Beautiful photos.

NaPoWriMo can really happen anytime you feel like doing something extreme. Hope you post a few of your poems some time this month!

Wow again...Families! Full of surprises, aren't they?! Tell me about it.
The day my son and his lovely partner told me some wonderful news, I was SO excited that I knocked a wall down as I backed out my car...!
Have a lovely lovely time next week. It sounds great: the wedding on a hill etc.
Enjoy every minute CB!

What magnificent photos! Looks like a lovely holiday, with a wedding to look forward to.

Congrats, that's wonderful news.And you've really got the camera bug now! What a lovely place. I'm glad you're noting all your ideas down, I'm sure the winter months will give you some time and space to write.

Man o man, do I ever still have a hard time wrapping my head around the fact that APRIL is AUTUMN where you are!

What our garden lacks is berry trees ...and crab apple trees .... I used to make wine from crab apples back in the UK ......

I would never get McD to go camping !! Another thing I used to enjoy doing...If it's beside a lake of river and you can go fishing :O)

Pictures getting better all the time I see :O) Mind you the scenery down there sure helps the inspiration :O)

They dont leave much time for anyone to be prepared do they!!!!

I've started blog...as such...I think you can search for it under mcdinzie...but I cant swear by it cause its all so very new!

I got married April 25th..15 years ago.It's a lucky month...It will be lucky for them too...I can feel it! Great pics...have fun, and hurry back when you are through..mother of the groom!!

Great photos! And congratulations on the big news. I'm looking forward to more of your poems when you have time to write, and to post them

Hang in there with all the craziness of a wedding...I guess you can be glad you aren't the mother of the bride! Best Wishes!

btw, i did the NaWriMo novel a few months back and it was an awesome achievement for me. so catch up and keep going if that's what you want, chief.

The time grows short--I know how busy it gets, with the wedding and all! How excited you must be! Sounds as if it will be a beautiful day for all!

CB,
An idyllic and pastoral week with the man you love, soaking up the ambiance and reviving all the good thoughts and feelings about life.
Good for you and it was nice of you to share it with us.
And now...the piece de resistance! a wedding.
Have a great time my friend.
rel

Goody goody, I can't WAIT to see THOSE pictures.

Bet you'll be weeping, CB. I would be.

May it be a joyful day for everyone.
love,b

We also camped at Easter but the mountains and the water were a little smaller.
Happy wedding, Mrs Planner, hope the happy day leads to lifelong happy.

How exciting CB! And all at such short notice! The photos, the musings, are as gorgeous as ever! :)

Thanks to all of you for your kind comments. The wedding went well - absolutely superb. What a wonderful day it was. I will be posting soon - as yet no photos, as on the day, lugging a camera was more than I could manage. Lots of photos were taken but I have no access to any of them yet.

Lovely, CB
Now have a good rest.
You will be feeling exhausted so LOOK AFTER CHIEF B.this w/end.

Yes, definitely time for some r&r!

Lovely photos! (As always) They remind me of how much I love to go camping.

Congratulations on the wedding!

Lovely photos. I had just read Grace Schulman's Apples, featured today on Poets.org before I visited your site.

I'm smitten with the idea that there is a mountain range called "The Remarkables" -- from the photo it looks like they live up to their name!